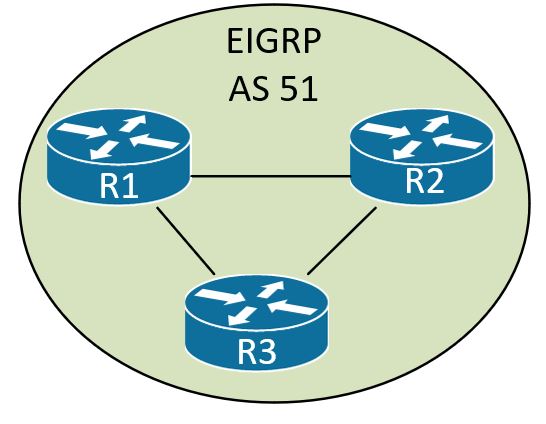 EIGRP is really the best protocol if you ask me. Cisco designed it with minimal configuration in mind but to have it still outperform anything else available! That’s exactly what they did. The term Cisco and many other people use is ‘plug and play’ networks, this is what EIGRP was made for. This is really to say that EIGRP was made to perform well when you don’t have much or any network design. You’re just plugging routers in and EIGRP will play along. Though when you have a routing protocol that can scale to huge sizes without much or any design, there’s go to be some guidelines, right, or some way to make it perform better when you do actually put the time in to design your network well. There are and you will indeed reap the benefits, of stability, scalability, and ninja fast speed, when you put in the thought and effort to design your network.

Now what gives EIGRP its ninja fast speed
is that it’s a distance vector protocol! But see Cisco designed it to it holds
a topology table, not a link state table, but a topology table, and it can
precompute backup routes. So it’s really a distance vector protocol that acts a
lot like a link state protocol, and that’s really what gives it the level of
scalability it has like OSPF. And of course just to make sure we’re clear,
EIGRP is cisco proprietary; so you won’t be running it unless you only have
Cisco routers in your network. But who would go with a heathen router anyway,
right? 😊

EIGRP operates in an autonomous system.
What does this mean? Well in order for the router to form neighbor
relationships, among the attributes that need to match is the AS number. If the
AS is different, then it’s basically considered to be a different routing
protocol and our existing AS can’t talk to it unless we distribute that AS into
ours, which we’ll talk about a little later. It’s worth noting that this is
configured in the same way as OSPF’s process number, but it’s an autonomous
system and actually matters with regards to forming neighbor relationships.

If you recall, the default order of
administrative distances, you know you have static routes here with an AD of 1,
and eBGP here
with an AD of 20, EIGRP here with an AD of 90, and OSPF here with 110. So
EIGRP, by default on Cisco devices, is a more trusted source of routing
information than OSPF. Now EIGRP actually has another AD, which is 5 for
summary routes, as a quick tidbit if you didn’t know.

I mentioned earlier that what gives EIGRP
its ninja fast reflex is that it uses precomputed backup routes. These routes
are called feasible successors, where the primary route is called a successor.
Now a feasible successor is a special type of backup route, it’s one that meets
the feasibility condition. Okay now you don’t need to know the feasibility
condition for the exam or the situation where it makes sense, but I really want
to go over this real quick anyway.